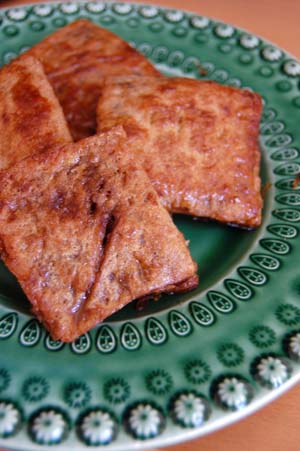 I love Chebe’s dairy-free, gluten-free Cinnamon Roll mix for sweet and healthy pastries, but it had been a while since I made any. I had heard of people making pop tarts from Chebe mixes before, but never a cinnamon pop tart. I researched online and, inspired by various gluten recipes, came up with this healthy and dairy-free pop tart recipe. The cinnamon filling did ooze out a bit, as I hadn’t sealed it well enough, but even so, I was able to turn the tarts and coat them in the filling and ended up with a delicious treat. – Book of Yum

Recipe and photos courtesy of Book of Yum

Recipe courtesy of Book of Yum